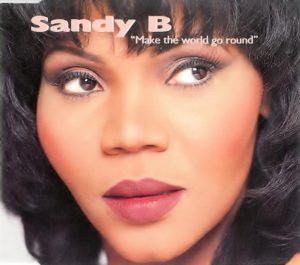 She is primarily known for two of her solo records which reached #1 on Billboard’s Dance/Club Play chart, “Make the World Go Round” and “Ain’t No Need To Hide” in 1996 and 1997, respectively. Both songs were produced by the duo Deep Dish.

In an unusual reversal of the conventional music industry success story, Sandy B had her #1 hits after leaving a major record label for an indie label. Though her two chart toppers were released on Champion Records, her debut #1 single “Feel Like Singin” had been released in 1992 on Nervous Records. She also released a single “Back Together” in 1994 on King Street Sounds.